So I am late in the day at posting my blog for this challenge for a variety of reasons....Easter Holidays with family last week, Birthday this week and now a trip to the docs because I can't see (minor infection - have ointment now).

So enough of me havering rubbish and on with the Spring Design Challenge.  I was one of a lucky few to be selected randomly to be able to purchase a pack containing delightful goodies from Lesley Watt of Theatoo, Claire Braunbarth of Smitten Beads and Caroline Dewison of blueberribeads.  Of course I had no clue which set I would receive and was pleasantly surprised when mine arrived below: 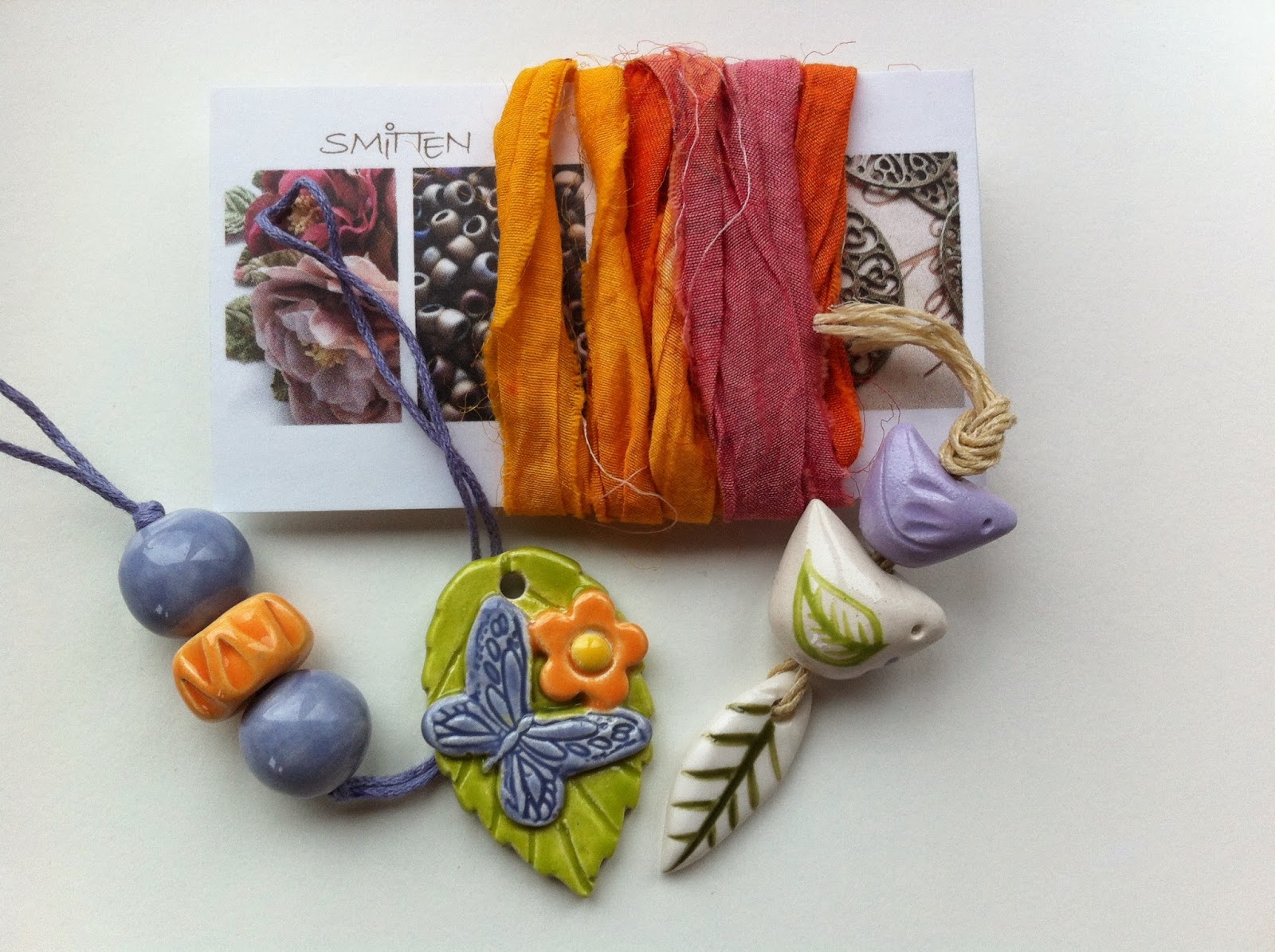 Some of you may know that I suffered an agonising hand injury at the end of December so this was my first attempt at making a jewellery set.  I opted to use waxed linen cord for the bracelet and necklace as this was easier on my hands.  However, despite lacking strength in my left hand and still having hypersensitivity in one finger I decided to try a pair of earrings with wire wrapping.  I found it really difficult but was quite proud that I managed to achieve my goal. 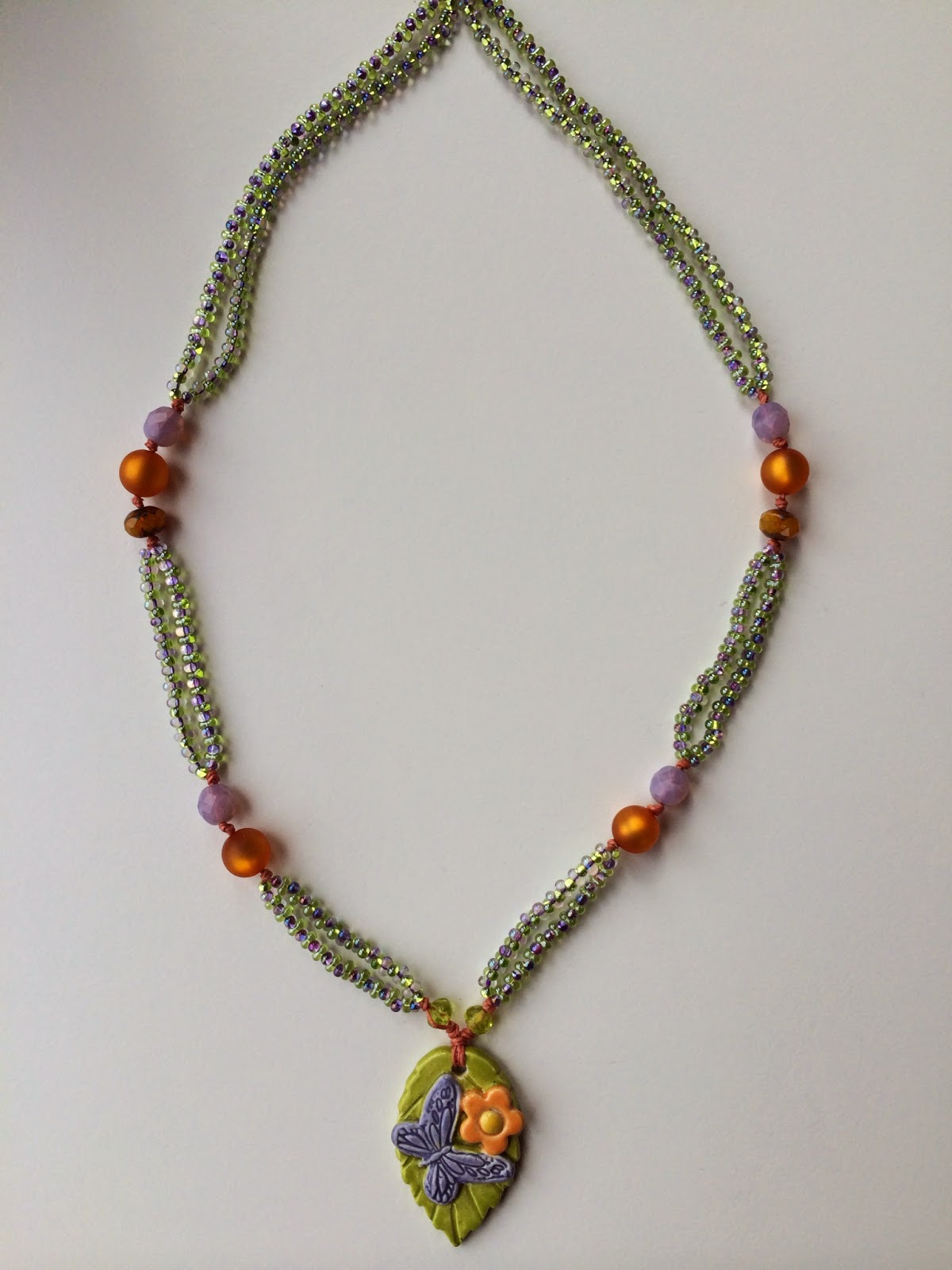 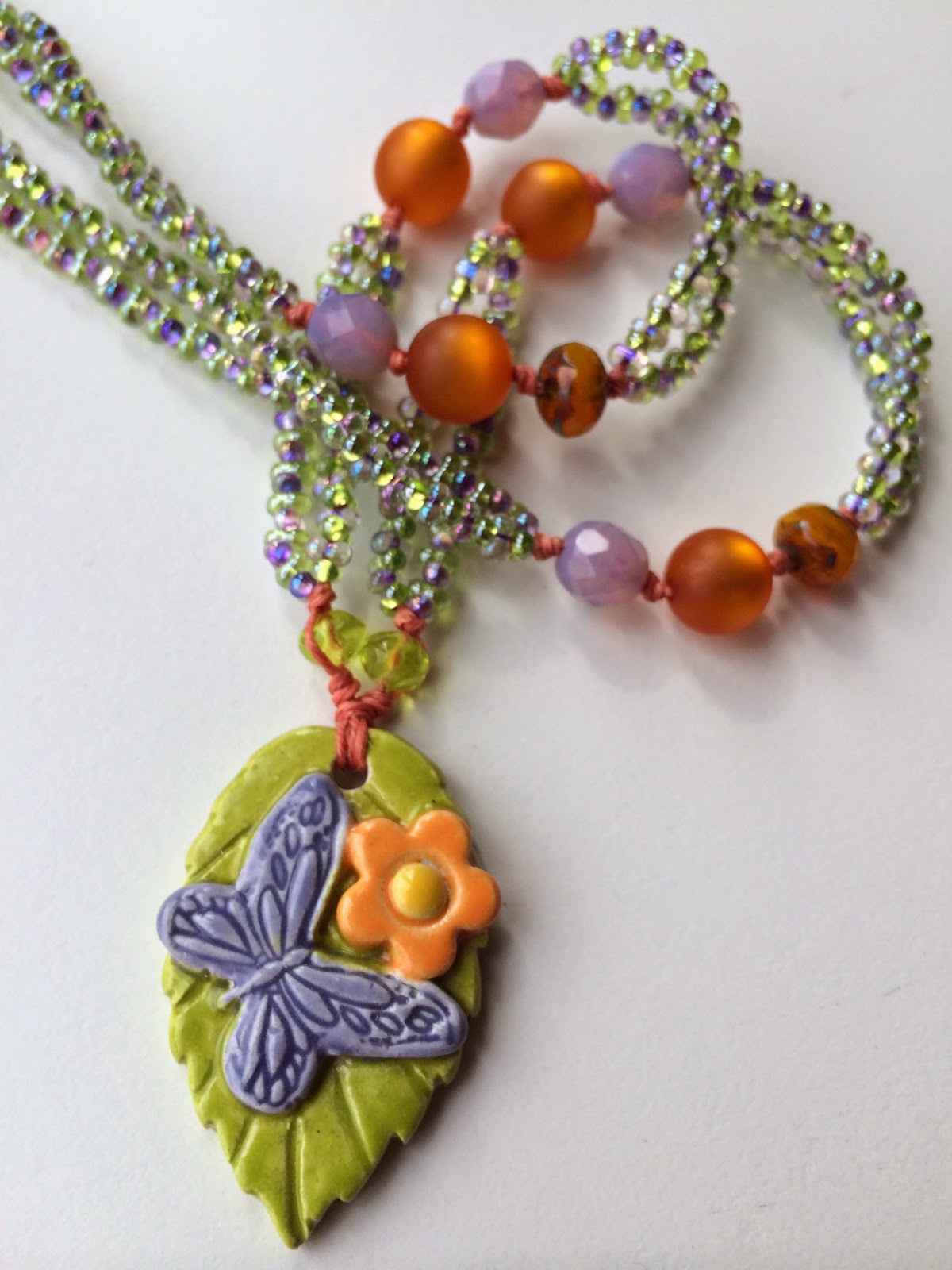 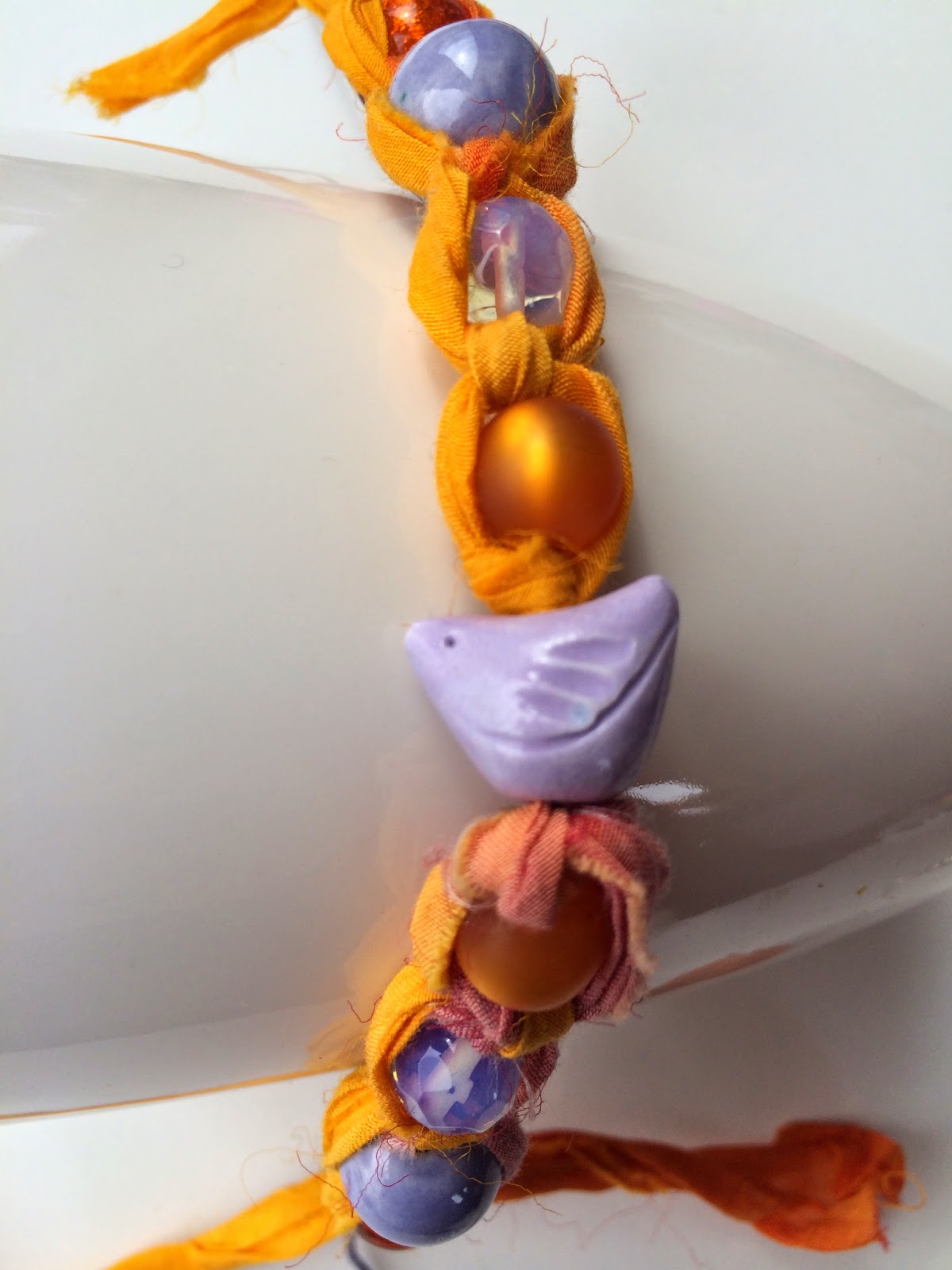 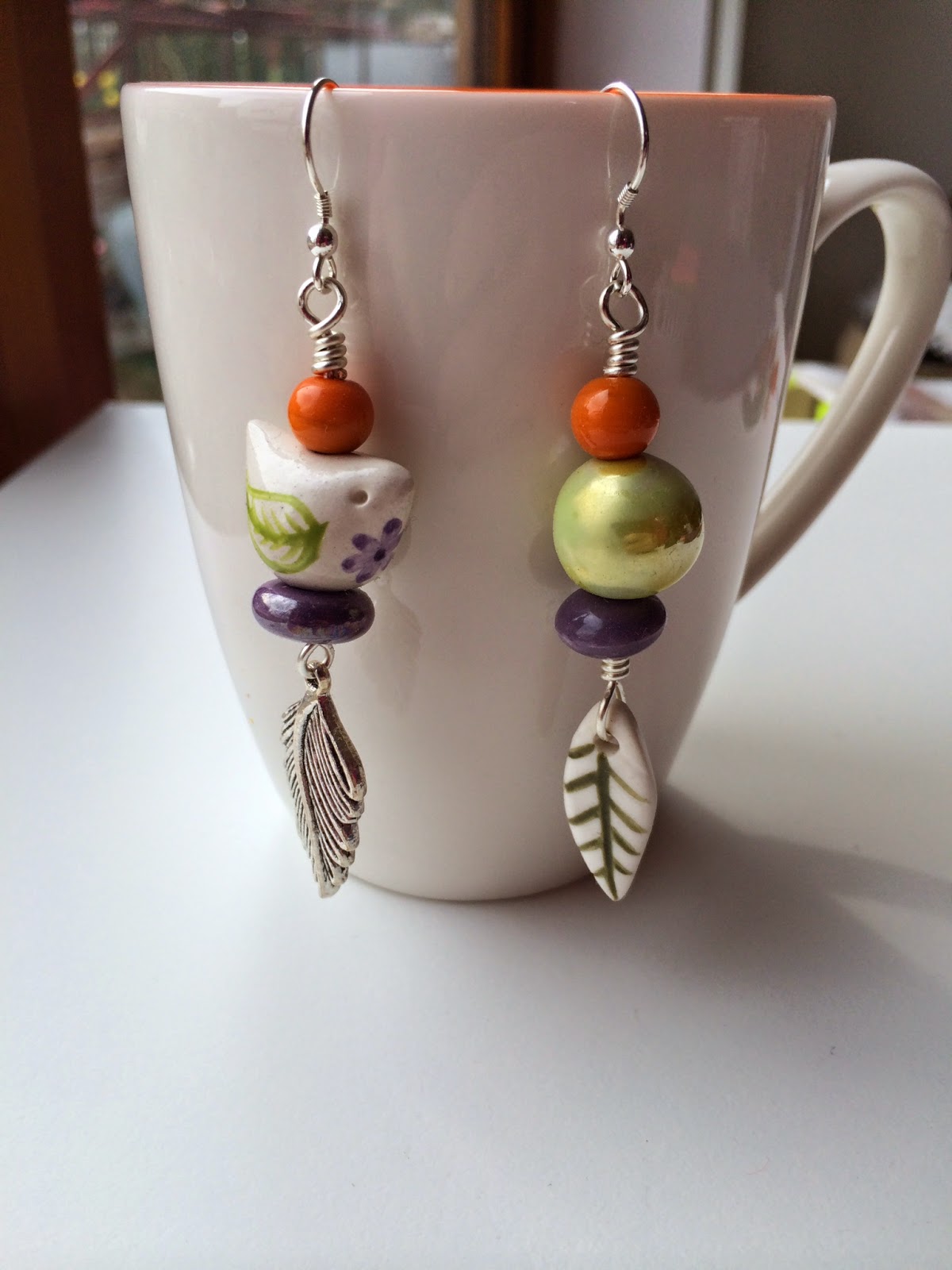 Now why don't you hop around these other blogs of the lovely ladies who are also participating in the challenge to see what they did with their packs.


This weeks challenge by Sally Russick is quite apt with Valentines Day having come and gone with more snow in the mix.  So here is my first offering some lovely snowdrops just coming through and then the gorgeous bunch of flowers from my Valentine. 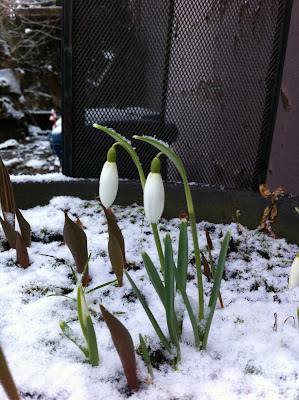 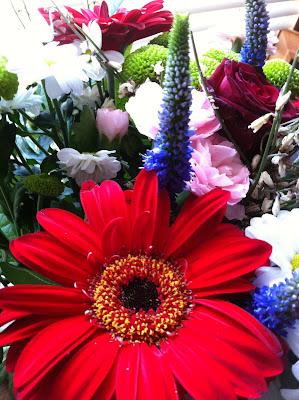 So another week goes by in Sally Russick's challenge to focus on life by taking 52 photos this year of 2013.

This week we were asked to feel the love in the air.... (when I say this week that was beginning of February but I was laid up with the flu and a nasty chest infection; still bothering me yet grrrr!!).  I took the pictures but it has taken me a couple of weeks to sit down on the computer to blog about it.

So it has been 4 years since Isla came into our lives and LOVE is a word I would use to describe her.

Another essential that makes me feel the love is SNOW of course I can't get enough of it so most of the winter season is taken up by snowboarding.  My partner works on the gritters so is often on standby and we don't get to snowboard as much as we like but it certainly helps that he has a passion to get the roads open to Glenshee (our local resort).  So back onto the subject of snow, you can imagine my delight when I got up in the morning to look out of the kitchen window to this view.

The hens are now used to the snow, but I can't imagine that they enjoy it like we do!!

I have to say that I am really enjoying Sally Russicks focus on life challenge.  I like the idea of something new each week and you never know what it will be so it is a surprise.

This week we were asked to take a few moments for ourself without feeling guilty.  The easiest way for me to do that is to go in the bath (where I can spend hours) without the ipad.

I decided to use my gorgeous face mask from lush - catastrophe comestic; filled with blueberries.

So here I am in peace: 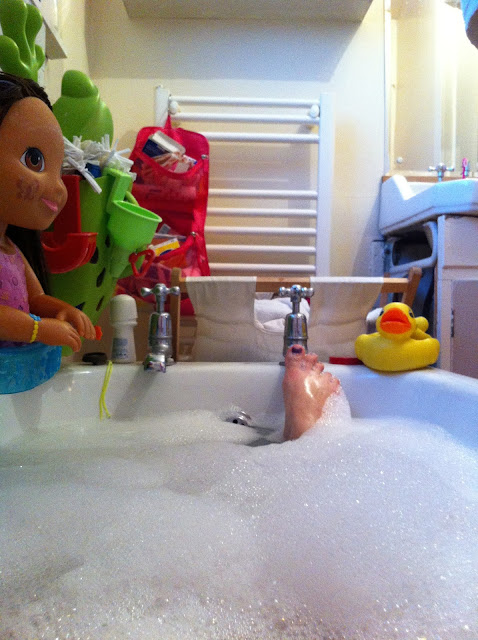 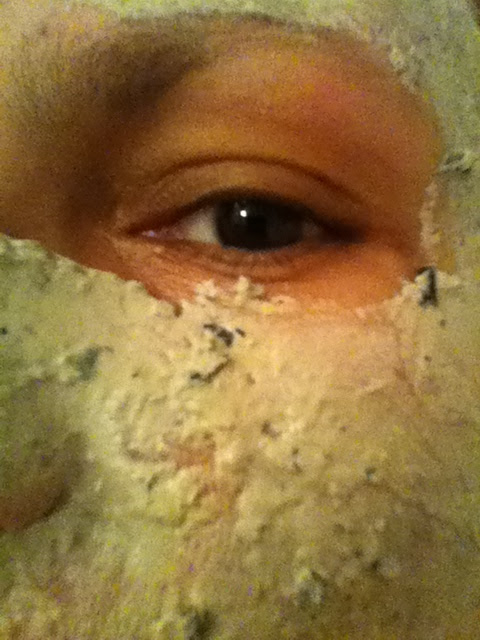 So whilst the dust is still settling from the results post, I decided to crack on with the first surprise.

This one will be for Lucy of Faerystone who is very kind to her beading colleagues with plenty of praise and advice.

Lucy asked for a complete surprise.  I hope I have picked well, I had in mind to gift Lucy this bracelet for sometime so what better time than the present.  It was one that she quite liked and enquired about a while ago.

Another idea I had after being the lucky recipient of a few prizes lately was to share some of my good luck and winnings with others.  Keeping with the same colour theme I thought this set of beads would be a nice surprise, they remind me of marbles.....

So Lucy I hope you like these, enjoy working with your new beads and wearing your new bracelet.  It's always nice to get something that someone else has made :D

Sorry it's been so long.....it's been mega busy and I have been overwhelmed with orders.  Just one more to go and its time for a well deserved rest.

I thought I better get on to all my loose ends, this being one of them!!!

I am looking forward to Christmas as my daughter is now 4 and is a bit more excited this year.  So here's wishing you all a very Merry Christmas and all the best for 2013.

The lucky winners are: 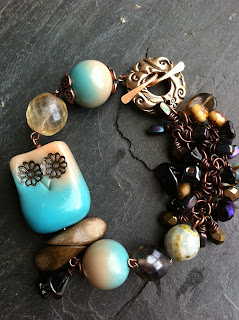 I will email you all shortly with the details on how to proceed.
Posted by Shee Sews at 06:26 1 comment:

I recently entered this challenge invited by some great designers and choose Edinburgh, Isle of Wight and Southhampton.

Edinburgh - proved to be a challenge read on and find out more!

The Stone of Destiny originally lay at Scone Palace in the lovely Perthshire from where I hail. People believe that the original stone was hidden prior to the invasion and has never been found.  The stones in existence today are merely copies.  Now here is my own version, I originally started using red sandstone as was used to make the original but it proved rather troublesome and here is the next attempt: 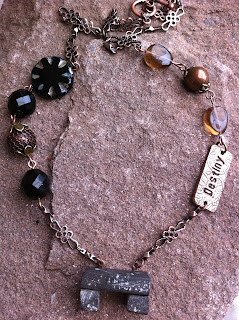 I remember beach holidays as a child.  When I saw Pippa Chandlers beach hut, it brought back those childhood memories.  So there you have it, this bracelet in sweet pinks is from these times, embodied by the image that the Isle of Wight pictures in my head as sadly I have never had the pleasure of holidaying there. 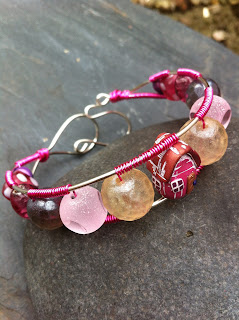 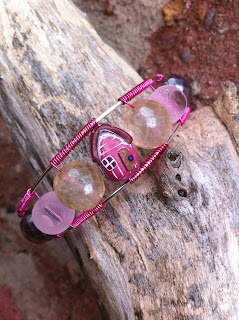 I picked this category and it was the hardest of the three that I picked.  It was a challenge to find the beads in the theme that I wanted.  Similar to Rebecca Anderson's cupcake idea, I have small bowls sitting on my dressing table with groups of beads awaiting inspiration.  I was originally thinking of using this combination for a winter/xmas theme but nothing was forthcoming until this blog challenge.

The titanic owners White Star line are symbolished by a red flag overlayed with a white star, the titanic itself was red, black and white.  So my colours fitted in perfectly and I used the frosted white pebbles to symbolise the icebergs.

An interesting fact for me is that the day/month that Titanic sank is the same as my birth date 15th April.  I was keen to lay my hands on beads to symbolise the star in the flag hence the pendant from Lesley Watt with waves incorporated in the design.  The brass ocean liner charm brings it all together.  I hope you agree. 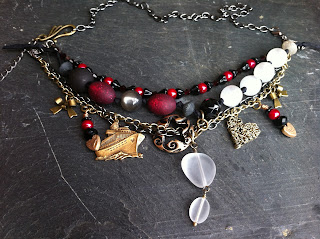 Another interesting thing about this piece is that it started out as a necklace, but can actually be worn as a bracelet as well, you decide.... 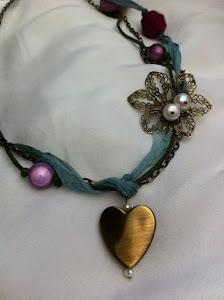